Washingdon DC is a city that knows how to do monuments and memorials well. From the grandeur of the Lincoln Memorial through to the solemnity of the Korean War Veterans Memorial. But what I found most interesting is how these structures and sculptures make you feel when you visit them in person. These are not actual grave sites, but yet they generate an emotional reverence by their very design. Three examples really stood out for me.

The first was the Lincoln Memorial. Located at the west end of the National Mall, the architect for the monument was Henry Bacon, while the sculpture of the Abraham Lincoln within was designed by sculptor Daniel Chester French. As a visitor, you approach the mall from the east side and are first met with an imposing set of steps that immediately challenge the human scale. But that is nothing compared to the imposing scale of the monument itself – taking the form of a 30m high Greek Doric temple, with a 5.8m tall marble statue of the President sitting in contemplation and looking gently down to the visiting people at his feet.

I found that while the building was imposing and dominant, once inside, the statue lent a feeling of calm and assurance to the enormous space. Perhaps it was the nature and history of the man it depicts, or perhaps the way the marble appears to flow in the robes and clothes of the man. 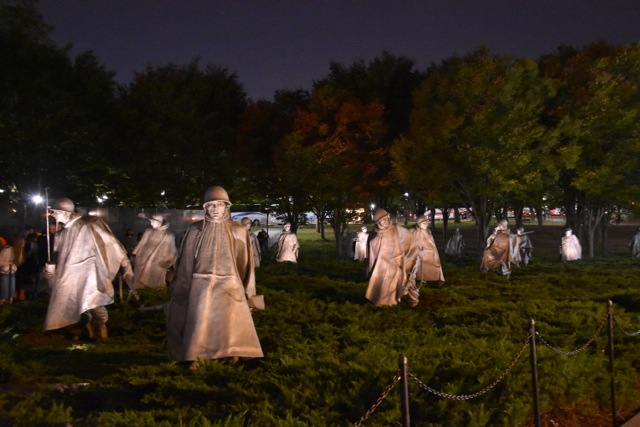 The second monument I’d like to mention is the Korean Veterans Memorial – located just near the Lincoln Memorial. This is more of a sculptural piece than architectural, and features 19 stainless steel sculptures – designed by sculptor Frank Gaylord – representing a military platoon on patrol. Each statue is dressed in full combat gear and is slightly larger than life size, at around 2.2m – 2.3m tall. They are in a v-formation and depicted walking through living juniper bushes, to represent the terrain of Korea. They are surrounded by a v-shaped path and on one side of that path a granite wall with photographs of the soliders etched into it.

There are no names on this memorial, it is simply a scene from the war, but it perfectly depicts the struggles of the military personnel. Whether it is the formation that you find the sculptures in or the looks on the faces of each soldier, the entire space generates an emotive response of remembrance. I think the idea of making the soldiers just a little taller than human scale makes them seem somehow larger than life and perhaps more heroic, while also retaining their connection to reality. These could have been real people frozen in time. 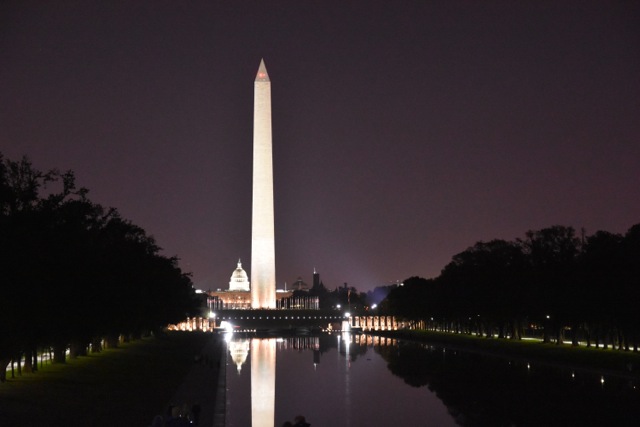 The third monument is one slightly different than the first two – the Washington Monument. This is the obelisk at the east end of the National Mall, directly in line with the Lincoln Memorial, with the Reflecting Pool between them. Built to commemorate George Washington, the Monument was designed by architect Robert Mills. Built of marble, granite and bluestone gneiss it is the worlds tallest stone structure at just over 169m tall. There is no representation of Washington the man on the monument itself.

Currently the interior of the monument is closed as the elevator has “become unreliable”, so it is now simply an obelisk. But is it an obelisk that can be seen from most places in DC – almost like a locating beacon. Its size and location on top of a small hill draws people towards it like a magnet. Although designed in 1836, its modern form makes it feel almost like a treasure that has been left overnight, with the city surprised and inquisitive at its presence.

About the Author: Melissa Fleming

Principal architect, founder and director of Metroworks Architects, Melissa has been involved in the industry full-time since graduating with Honours from Deakin University in 1995. She has single-handedly developed her business into a multi-award winning, boutique practice that offers high quality and personalised architectural solutions - specialising in the design of new homes and major renovations.